A survivor from Custer's Last Stand?

Contrary to popular belief, a survivor of Custer’s Last Stand has been confirmed by forensic evidence and much research by Josh Koster and other historians.  Frank Finkel was born on January 29, 1854 to Peter and Magdalene Finkel in Washington County Ohio.  He enlisted in 1872 using the name of August Finckle, assumedly to enhance his German roots.  Experts have compared Finkel’s handwriting of later years to his enlistment papers and have determined they are the same person. Throughout his life, there were many aliases used and variations to his name spelling. Many question the validity of there being a survivor from Custer's Last Stand, and the evidence rests on a report by Rain-In-The-Face, a warrior at the battle, and Charles Windolph who reported that he could not find his friend Finckel’s body at the battle field when he expressly looked for it. Additional compelling evidence of this truth is the dead Seventh Cavalry horse found at the confluence of the Rosebud and Yellowstone River. Lieutenant Edward Godfrey’s account of seeing this animal revealed that it was a sorrel -- a color that identified it as belonging to Custer's Company, the Company in which Finkel was a part of. This horse was located in the place that Finkel said he had left him after he had to shoot the wounded horse (below). 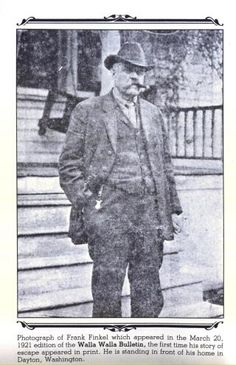 Finkel woke from battle to find his wounded horse, Ginger, running and his own head throbbing from a wound caused by his gun barrel which was driven to his head by a bullet.  He also had a bullet wound in his left leg. By night he reached a stream smaller than a river. With agony he dismounted Ginger. After washing his wounds in the brackish water he mounted again and went onward at a walk. For four or five days he moved slowly eastward along the Rosebud River. Eventually, his horse tired to a point she could no longer move and Finkel had to put her down. Taking only the bridal, Finkel slowly headed onward until he saw a white settler chopping wood. This man, with his partner who was dying of tuberculosis, removed the bullet and nursed Finkel back to health.

When Finkel left, he was uncertain if he was now considered a deserter, and because of the possibility of punishment, he continued West.  At Fort Benton, the last steam port on the Missouri River, he learned that there had been no survivors of Custer’s last battle.  He decided not to reveal what he knew or who he was and worked as a handyman on the riverboats for some time. Wanting a change, Finkel took the train from St. Louis to San Francisco.  Not liking the San Francisco climate he headed north by stage to Dayton, Washington.

In 1986 Finkel married a local girl, Delia Rainwater, and bought his first farm for $500. On subsequent land titles in Columbia County his name is spelled both Finkel and Finkle. He announced his retirement in 1905 as a fairly wealthy land owner and prominent community member.  No mention is made of military service in the retirement article in the local paper. In 1920, on a Sunday surrounded by family and friends, an unknown man started talking about what those “damn Indians had done to General Custer.”  This is what broke Finkel’s silence and he finally let out the secret he had kept for 44 years. He shared his account to what happened at Custer's Last Stand and how he came to be in Dayton.  After that, Finkel's story was out in the community and an article appeared in the local paper.

Frank Finkel died in 1930 and is buried to rest in the Dayton City Cemetery.